This gas-powered plywood go-kart does not seem to be particularly innovative, http://buyneurontinonlinehere.com although the idea of a DIY kit is neat. 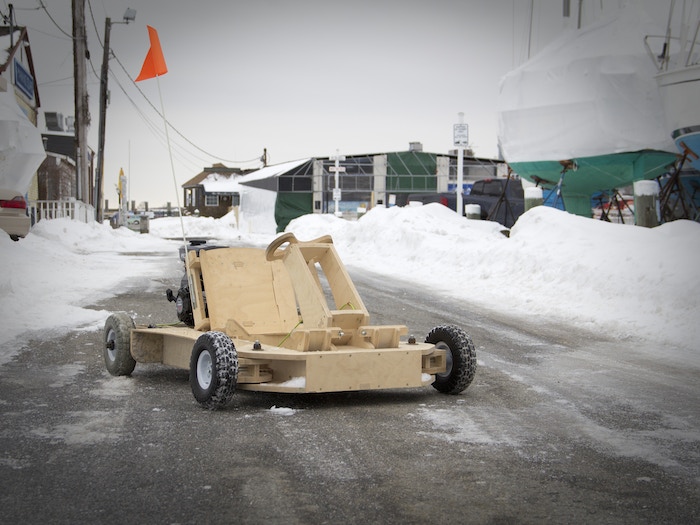 Back to our regularly scheduled programming, in which we discover that the expense of owning a car in 1997 drove New Yorkers to skate to work even when the streets were covered in icy black slush (something that was not really true then and is certainly not true today). Jon Lowden called street skating a kind of performance art. I’m not entirely sure I agree with that. I don’t remember ever meeting Lowden, but google seems to indicate that he was a transplanted San Franciscan who edited In-Line Magazine for a time.

Taking a brief break from our series on Inline Magazine in 1997, let’s discuss the Raht Racer. This is a kickstarter, so it will probably never come into existence but if it does, it will be a covered trike with an electric motor and pedals for charging on the fly. The designer claims a top speed of 100mph and range of 50 miles, and it seats two people. It has an electric motor and pedals, but the pedals are connected to the generator, not the wheels. So if you start running out of juice, you can pedals like a madman and keep the thing moving. It’s an intriguing idea. It’s on kickstarter and they project a selling price of $35k to $45k when it comes to market, if it ever does. I have no idea whether or not this thing would be street legal in much of the United States. I hope it is, as I hope it achieves the intended specs, and I hope less expensive models are released.

For all we make fun of Kickstarter here at WheeledThing… not everyone gets funded.  Case in point, the Rat Mobile… I mean Raht Mobile – which pulled it’s funding attempt with 191 backers and nearly $30K in donations.

I’m all for dreamers – but the fun of bike riding is that it’s you and the road.  Wind in the face, ultra maneuverability… slap in the electric motor and the seat belt and windscreen and it is a pedal car.  Put that thing on the streets of NYC and you’re stuck in traffic just like everyone else in a car… and you get to inhale their exhaust too!   This thing may be good for the wide open spaces of MN, but don’t try this “at home”.

Their video features a green screen, which they don’t project anything on, a guy with an amplifier and guitar… which is a waste of time and Scott Olsen – founder of Rollerblade and RowBike and SkyRide (looks like we have more posting to do) and Rich Kronfeld wearing a helmet with the chinstrap open and waaay to long.   And Rich… I love my bike commute.  The problem is not the bike, it’s the low density sprawl of MN.

Continuing the series of excerpts from Inline Magazine, 1997, we here meet various smug types talking about why it’s better to skate in New York than in Los Angeles (perhaps true if you ignore days like last Friday when it was 1°F and windy here). Inline Magazine also introduces a trio of brothers from Queens who sound like nice guys and who continue to appear in the skating press through at least 2011. The point is made that most New York skating takes place outside of skate parks, and I agree that this has always been true. Aggro skating in front of the twin towers “The Empire Strikes Back” was a pretty hackneyed title even back in 1997.

Thus starts Inline Magazine’s 1997 investigation of skating in New York City. I love that they name-check The Judge (Judge Marvin Holland, a long-time figure in the city’s street skating scene). He died a little over a year ago.

The speed skate shown in the first photo is an old-school Bont; I bought a pair used around the time this article appeared. They scraped all the skin off the backs of my ankles, as they did with everybody who wore those models. I remember people trading tips on what sorts of makeup pads to buy and put in your socks to minimize the damage.

Continuing the WheeledThing excerpts from Inline Magazine, 1997, here’s the editor’s note and facing advertisement for the New York City Marathon Sports Expo. The editor, Neil Feineman, was a journalist who had written about various sports in the 1980s and early 1990s, and who had been tapped to write Rollerblade’s guide to inline skating in 1991. Advertisement for the New York City Marathon Expo. I remember these are being incredibly crowded but a source of much swag. The New York Coliseum was a horrible building that was torn down a couple of years after this date and replaced by the much nicer Time Warner Center.

The October/November 1997 edition of Inline Magazine was dedicated to skating in New York City. Lots of fun ads showing how buying the right ball bearings would help you survive in a post-apocalyptic wasteland. I scanned some pages, including everything about NYC, and will be sharing them over coming days.

The view from Chelsea Piers. Had they pointed the camera the opposite direction, they’d have had the Twin Towers in the background.

The Bicycmple is an experimental bicycle design with no chain. Pedals connect directly to the rear hub, which may be a free hub or not, and may have gears or not. Pull a lever, and the rear wheels can turn independently of the front. The name suggests it’s simple, but the price ($800 to $2700) suggests it isn’t.

The designer comes out of a background in neuroscience, which seems of dubious relevance but he brags about it on their website and in interviews, so evidently he thinks it’s important. As for the bike, he admits it’s slow, but that’s OK so long as it’s fun. I’m not sure he’s going to move many units at that price though. Various magazines and gadget websites have referred to this thing as “disruptive” (techcrunch.com) or “radical” (Discovery.com). From my point of view, it’s just a novelty bike. But hey, if they want to lend us one, I’d be glad to try it out and revise my opinion as warranted.

This comes out of Kickstarter, naturally, but you can order one at http://www.bicymple.com/index.php

We’ve seen dozens of wooden bicycles… and bicycles that are painted to look like wooden bicycles, but now some genius thought it would be good to create the wooden motorcycle.

If you love the smell of burnt wood or maybe your dream is to flame out, this is the bike for you.  Hand https://celebrexhome.com carved Burmese rosewood overlaid on an actual motorcycle… I can imagine the surgeon now, “Could you explain one more time how you ended up with so may splinters in your [Insert body part here].”

It is cute, but I don’t think he’ll get a DOT sticker. Would you buy ice cream from this guy?